A life peripatetic
A regular change of scene makes perfect sense to Maurice Herson, in any language

Maurice Herson owns a lot of dictionaries. English, Arabic, more English. Latin and Greek. Some French, German, Italian and Dutch. Oh, and Indonesian. Language is both his passion and a key to opening up other cultures: “I spent a couple of months in Somalia, and I got a Somali grammar book because I didn’t want to be surrounded by people speaking a language of which I have no inkling. But it’s an opportunity as well. I learned all sorts of things by doing that. Languages are one of my pleasures.”

Running his whole life on what he describes as ‘an opportunistic basis’, Maurice followed gut instincts and considered chances into different careers, in varied locations. “I’ve done lots of things”, he understates. After studying classics, he spent a long time overseas working for various charities, including Oxfam. But he also lists graphic designer, lorry driver and magazine editor amongst his past jobs.

Maurice lives in an interesting property in Vitsœ’s home town of Royal Leamington Spa, England, which he bought in 2022. It was formerly a workshop owned by the father of Sir Frank Whittle, an engineer who invented the turbojet engine. If one was romantic, one might imagine young Frank making up a model Meccano lathe in the corner. But the Whittle connection wasn’t the attraction for Maurice. “I bought it because I grew up in a 1920s house in the London suburbs. I’ve also lived in standard 1930s, 1940s or Victorian houses, and they’re all sort of the same. But when I walked in here this was different. And it was the difference that attracted me.” The building has interesting bones but the workshop aspect is now given over to living space and a small courtyard where Maurice has planted a vertical garden.

Yet Maurice’s serendipitous career meant living in standard English housing was an off-again/on-again situation for him. After his first job abroad, in Greece, he saw a small advert for native English speakers to teach in Sudan. He spent a year there teaching English in government schools and found he didn’t want to leave. This was in the mid-1980s, when Ethiopian famine and ‘Band Aid’ were happening. Illness, however, sent him back to the United Kingdom – but once recovered he offered his experience and Arabic language-skills to the charity Save the Children, and was soon on his way back to Darfur in western Sudan.

A while later, on returning to England again, he took a master’s degree in linguistics followed by a spell as a lorry driver. Behind the wheel, listening to the BBC World Service on the radio, he heard someone from Oxfam talking about their work. He sent the speaker a letter. This resulted in Maurice spending two and a half years back in north-east Sudan running a food distribution programme, during the tail-end of that country’s famine recovery. All in all, he worked 17 years for Oxfam, in many different jobs, including stints in Sri Lanka, Somalia, Indonesia, Rwanda, Central America, the Balkans and Oxford, England – where Oxfam has its headquarters.

A job at the University of Oxford editing a magazine about refugees followed his Oxfam years; it ‘fitted perfectly well’ with his experience. Oxford is also where he became involved in the ‘Library of Things’, a project giving people access to things they might need temporarily but don’t need to own. It’s a growing movement. A bread maker was the first item you could loan from the library. It was followed by many tools, fairy lights, a large lawnmower, and then some 750 other things of occasional usefulness. For Maurice, this project suited his desire for somewhere he could go and get dirty, hands-on, use his skills and learnings, and feel part of the bigger (human) picture. “I hate the idea that so much stuff gets thrown away, but more importantly, so much stuff gets bought unnecessarily. I’ve got a sign stuck on my notice board that says something like: ‘Never mind recycling, just buy less’. It’s that idea. The idea that you could say to people: no, don’t buy a drill. Borrow ours. Unless you need one for yourself all the time.”

During the pandemic Maurice had some time to deep-think, and he found he was restless for change. For a different kind of life. He wanted somewhere he could continue cycling everywhere, as he lives on his bike. He didn’t want to live in a village and didn’t want to live in a city. So, after 29 years living in Oxford, Maurice’s itch to move on again resulted in his arrival in Royal Leamington Spa. Despite some material downsizing, Maurice arrived with a good number of books. In Oxford he had housed his dictionaries and other books on homemade shelves, made from his recycled attic-floorboards. But circumstances came together in Leamington for him to upgrade and future-proof his bookshelves. All his other furniture reflects his peripatetic life; everything else is reused from his other homes. There are no designer pieces – but everything has its own story.

His criteria for new shelves was that they would be of good quality, but also look nice. A Google search for modular shelving landed Maurice on Vitsœ’s website where he found Dieter Rams’s Ten Principles for Good Design, each of which really resonated with him. He liked that the website contained more than just ‘pretty pictures’. He is, he says, a hands-on person – and he didn’t want shelving to turn up and be unable to understand how they worked.

He was taken with the reasons why Vitsœ built its own factory, and particularly (for a man who likes to repair things) that the services in the building were designed to be visible and accessible. The thoughtfulness of the build and business struck him. And then the thoughtfulness of the product design too. Although he had never previously heard of Dieter Rams, he is now well and truly obsessed with his 606 shelving system. “I look at the turn on these shelves and I enjoy that every day. It’s ridiculous, isn’t it?”

To those of us who only travel to other countries for a number of days or weeks at a time, Maurice has lived abroad to an unusual extent. But he probably sees himself as having been re-rooted, rather than uprooted – and he thrived. “I think all of us human beings struggle to some degree with change. Some of us like change and others hate it. I like change.” He is not altogether horrified by the prospect of moving on from Royal Leamington Spa at some point and is tickled by the fact his 606 shelving system is designed to move right along with him. 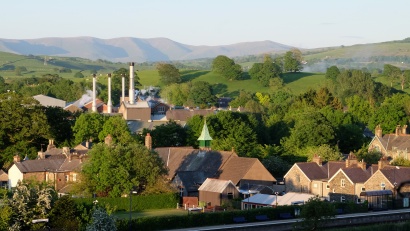 Paper in the Lakes

Enthusiastically ensuring a seventh generation of papermakers embraces the future 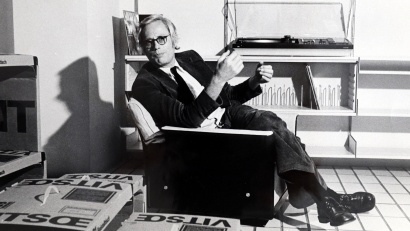 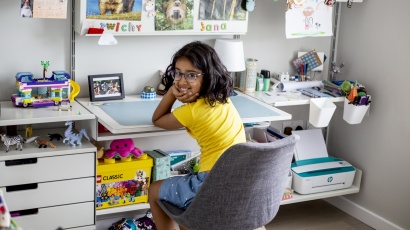 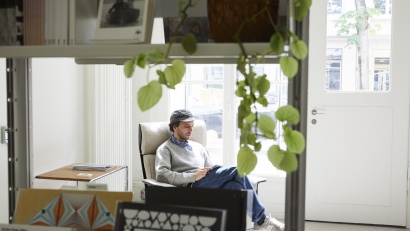 The life and work of independent publisher Benjamin Sommerhalder