A few steps to tranquillity
Author and journalist Kassia St Clair is led down the garden path.

Children’s author Roald Dahl wrote many of his popular stories in his garden shed in Buckinghamshire. Dylan Thomas penned poetry in a tiny timber hut perched on a cliff above the Welsh Carmarthenshire coastline. Over a period of 20 years, playwright George Bernard-Shaw retreated to his shed in St Albans. Similarly, Virginia Woolf chose to write novels from her potting shed in Sussex, while author Philip Pullman created the entire ‘His Dark Materials’ trilogy from his shed in Oxford. The list of notable British writers, who have sought the escape and solitude offered by the humble garden shed, goes on.

Which is where we find Kassia St Clair one sunny morning, sitting at her desk, birds singing away in the background and sunlight flooding through the windows, in what she lovingly describes as her ‘shed’, a garden studio-office created by Oxfordshire-based micro-architecture specialists 3rdSpace. Far from a traditional garden structure, this is a clean, modern, purpose-built construction, but with a very much lived-in and personalised feel.

The journey here each day is a swift one, a short commute from the back door of her south London flat, which she shares with husband Olivier, and Luna - the picnic-raiding Cockapoo. Her transition is to a world of colourful postcards and post-it-notes. A large map – part of the research for her next book – takes up a full wall. Among the research-notes and books, various pot-plants, photographs, inkpots and an extensive fountain-pen collection adorn the shelves.

Having left university, where she read history, she interned for various periodicals, landing her first ‘proper’ job writing for House and Garden magazine as an assistant food-and-wine editor, before eventually moving on the books-and-arts section of The Economist newspaper (and fitting a master’s degree in between). Meanwhile, she began writing a column on ‘colour’ for Elle Decoration magazine.

After a number of years in the industry however, Kassia found her career wasn’t progressing at the same rate as her writing and decided to take the plunge as an author. With no pre-existing offers in place, she found herself an agent and successfully pitched her first book idea. The catch? – her publishers insisted on an incredibly tight deadline of just five months. She found herself researching and writing whilst simultaneously holding down a full-time job. Following an intense period of 5am starts and extremely late nights, Kassia successfully delivered her finished book ‘The Secret Lives of Colour’.

By then it had become abundantly clear that juggling two very demanding jobs wasn’t sustainable – a choice needed to be made. After much soul-searching, she took a leap of faith and handed in her notice at the newspaper. Her last day coincided almost exactly with the delivery of her final manuscript. She awoke the next morning with no job, no idea if her book would sell – and no other work in the pipeline – to realise, “OK, I write books now – or at least I’d better, because otherwise I don’t have anything else to do!”.

The notion that this was a brave undertaking she dismisses as “charitable”, rather “a decision made under a little bit too much pressure.” Yet despite the uncertainties, the gamble paid off. ‘The Secret Lives of Colour’ became a bestseller, and a staple of museum gift-shops and design bookshops across the globe. It has since been translated into multiple languages. A second book soon followed: ‘The Golden Thread’, a history of textiles and fabrics.

In tandem with her books, Kassia has also managed to maintain a role in print journalism, writing freelance for a number of publications – such as Wired and Architectural Digest – on a diverse range of topics from art and design, cultural history and science, to film, TV and book reviews. Reading her articles, it’s clear she thrives on subjects that surprise the reader, digging out fascinating details you’d probably never considered. Her aim is to turn readers’ minds to something they use or see on a regular basis, refocus their attention, and reveal just how fascinating everyday things can be. The intent being “to remind us that much of what we take for granted often has a complex and surprising backstory”.

Perhaps inevitably, she tends to become ‘typecast’ for articles on the subjects of colour and textiles – a victim of her own successes. In order to diversify, therefore, she has to maintain a steady flow of fresh story pitches. As Kassia explains, for a freelance writer, “Out of 20 pitches you can only hope for about half of the editors to reply – and given the challenges currently facing the media industry, journalists fully expect the majority of those to be rejections.” So, on the occasions that an article comes to fruition, she finds it all the more rewarding.

Into this mix, until late 2018, she was also co-hosting the writer’s podcast ‘Always take notes’. So how does she juggle multiple journalistic assignments, major book projects, and other commitments all on-the-boil at once? All projects run in parallel – continuously – which isn’t usually problematic, but when magazine commissions mount up it’s easy to lose sight of the bigger book projects, which can go months-on-end without attention. “The trick is keeping track of multiple looming deadlines”, she says, comparing it to cooking and remembering that the potatoes are boiling away, “You can completely forget about them, but sooner or later they’ll turn into mush while you’re busy with the flash-frying!”

The real challenge, she says, comes when organising time on a daily, or even hourly level. A morning person through-and-through, she works to a strict, self-imposed structure, assisted by her treasured Melitta coffee maker – without fail her final stop before heading out to the hut. A typical morning will find her at her desk by 6.30am sharp, where she looks out onto bird feeders in the fig and pear trees popular with the local rose-ringed parakeet population (now thriving in the London suburbs following a 1970s aviary escape). She writes in 40-minute bursts, aided by a phone-app called ‘Forest’, taking five-minute breaks in between. She maintains this concentrated routine for up to six hours, by the end of which she admits, “I’m done, my brain is mush” – though currently, this is the point at which she’ll spend an extra hour learning a new language.

Admitting to being “distressingly analogue”, thinking best with pen and paper, she has a very particular and unique working process. The shelves behind her are fully packed with lever-arch files and notebooks, heaving with research, writing and ‘mind-maps’ for her books and articles. An explosion of countless multi-coloured sticky labels burst from the open end of each. Within, stripes of brightly coloured highlighter ink decorate page after page. These represent Kassia’s colour-coding systems for organising her work thematically – a system which probably makes sense to nobody else but her. “I just don’t know how anybody does this on a computer screen”, she puzzles.

So, any downsides? Very few in fact, though admittedly she misses working with colleagues. Book editors, she’s found, will leave you alone to write for weeks-on-end – meaning almost zero human contact. Although this is very much her private workspace, Olivier is known to wander in and out during the day with cups of tea. Depending on how work is progressing, she’ll either take the time to chat, or send him packing.

The subject of Kassia’s new book marks a substantial change in direction from the previous two. It’s also her biggest project to date in terms of ambition and scope. Without revealing too much, it covers an Edwardian motor-car race, the cultural and political histories of the remote regions along its route, and the emerging technologies of the time. It is also a human-interest story, focussing on the travellers who undertook an extraordinary journey, thought by many at the time to be an impossibility. Frustratingly, much of the source material happens to be in languages other than English, an added complication which led to her latest bold decision, learning Russian, hence the plethora of post-it notes that decorate the workspace.

Together with her husband, she’s intending to recreate the journey over two months next summer in ‘Barbara’, a vintage 1990’s Toyota Landcruiser they’ve acquired for the trip. The terrain the route takes is unforgiving to say the least, so they purposely chose a functional, reliable vehicle, with easily replaceable parts, that can “just do the job”. It’s being adapted to carry extra fuel and water, and also to serve as overnight accommodation.

Having relinquished the security of a steady job, the busy, colleague-packed newsroom – and the office space it afforded, she remains keen to keep some separation between work and home. The nature of her work requires deep concentration, but come the end of a working day, she closes the door on it all, taking the few short steps back home, feeling like she can leave her work locked away for a while, both physically and mentally. 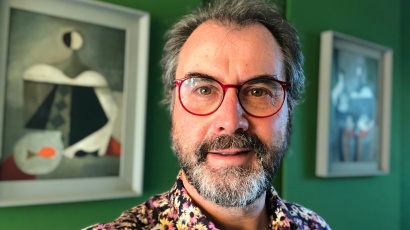 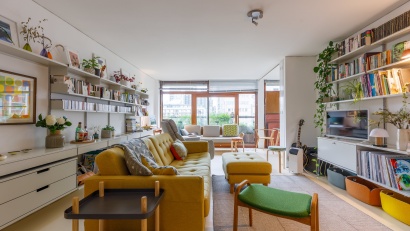 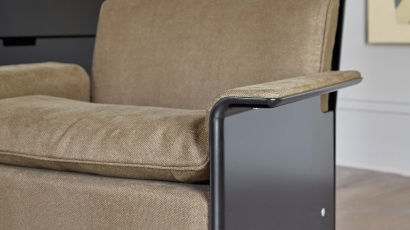 The 620 Chair Programme has a new linen coat. We asked the writer and curator Jane Audas to take a seat.