Wilderness, work and well-being
From London to rural Somerset, with Studio Levien

A rural idyll is something not easily found beyond our dreams. Yet a carefully crafted stretch of land in Brewham, near Bruton, Somerset in England has become just such a spot for residents Robin Levien and Patricia Stainton, founders of product design company Studio Levien. They now both live and work in Brewham permanently, having gradually pulled out of London over the years. There they have re-designed and revived the main house and its outbuildings, according to their work and inclinations. For Robin this means a studio and workshop spaces. For Patricia, this is her office, her gardens and her greenhouses. Their move to Somerset was sealed (if not prompted) by the pandemic. Patricia was already well ensconced there. But Robin, a self-confessed Londoner to his bones, was still working with one foot in both places and a very long commute between the two. But now the deed is done.

The couple set up Studio Levien, whose work is mainly in ceramic (industrial and domestic), in 1999. Over the years they have been behind many of the tableware and sanitation products we use in our everyday lives. It has been said they design products ‘for both ends of the alimentary canal.’ Projects include cutlery for Guzzini and teapots and tableware for John Lewis. Studio Levien designs have always erred on the plain side, whether toilets, sinks or saucers. Extraneous details are a no no. Colour comes in sparingly (almost begrudgingly) and has to earn its keep. Pattern has pretty much been put out to pasture.

Robin’s large studio / barn on the site in Brewham was built in 2017. It is very handsome and airy, with a pitched roof (the shape of which echoes those on nearby outbuildings) and walls of vertical timber cladding. The whole is a quiet presence on the landscape and satisfyingly utilitarian, it was designed with Thread Architects and built by Paul Stephens. The latter collaborated on many of the conversions on site. He knows, Patricia says, how fussy she is about details. One half of this studio barn space contains a meeting table, toilet and small kitchen, where coffee comes in one of Robin’s Thomas Trend cups. The other half of the space is Robin’s office where he spends a goodly amount of time, sitting down from around 08.00 in the morning to start zooming. Pulling the two areas together, visually speaking, is lots of 606, freestanding and wall-mounted. It was moved here from their London studio and houses both Studio Levien archive designs and models, and more recent 3D printed prototypes. The whole single-storey studio space is gallery-like yet functional; both an archive and a workspace.

Patricia, still a director in Studio Levien, doesn’t do any of the design work these days. She is very much more interested in the outdoors and has just launched a website called Forest of Selwood, to promote and look after the trees, rivers, grasslands and meadows of the ancient forest of Selwood in which she and Robin live. It was a forest back in 878, when King Alfred (the Great, as his good friends named him) and his men took refuge there before putting on their armour to fight in the Battle of Ethandune. Patricia trained as a fine artist but moving to Brewham gave her the opportunity to work with colour and form in a different medium - when she designed the somewhat fabulous gardens that wrap around the house. She has become famous for her style of gardening. Indeed, they were, at the time of our visit, featured (again) in Gardens Illustrated magazine. Her beloved spot in the gardens (out of many) is: “Sitting on a swing seat at the front of the house, looking up the rill, watching the dragonflies flying up and down. In the shade of one of my favourite plants Elaeagus Quicksilver, a deciduous shrub with attractive silvery, willow-like leaves. Clusters of inconspicuous, yet highly fragrant yellow flowers appear on it in the summer.”

The landscape (all 40 acres of it) was what caught Patirica and Robin’s eye initially, because it contained a useful selection of out-houses. These they have completely rebuilt and restored, one after the other, retaining what they could of each of the original structures. They now have a workshop housing the interesting tools of their design trade. In another building Patricia organises wildlife watch clubs and workshops teaching children to make birdboxes, or adults how to grow meadows. There is a sizeable vegetable garden, greenhouses and a cider orchard - well protected from the deer and wildlife who like to sample the goods. The main house, dating from the 16th century, is low ceilinged, beamed, cosy and domestic. There is a dresser full of ceramics, as you might hope. And they have extended the house at the rear, pushing the living out into the garden, as you would absolutely want to if you lived there.

Patricia and Robin first met (some 50 years ago) at the Ralf West Halls of Residence, for students from art schools all over London. Robin was on a ceramics course at the Central School of Art and Design and Patricia was at the London College of Printing on a graphic design course. Eventually they both attended the RCA, where Robin studied ceramics and Patricia printmaking. And it was there, Robin recalls, that a tutorial with ceramicist Hans Coper changed his journey. Despite the fact that Robin had been making artistic ceramics, Coper told him: “I think you should be a designer.” And so, Robin ‘Woke up to what I needed to do.’ After graduating in 1976 he spent two decades working in partnership with his ex-Professor David Queensberry, later becoming a senior partner in Queensberry Hunt Levien. And then he set up Studio Levien, with Patricia, in 1999.

There are some of Patricia’s artworks in the main house; large drawings and oil paintings, detailed and nature-themed. Although Patricia was very involved in Studio Levien in the early days, after the move to Somerset nature won her over. She became very involved in the Somerset Wildlife Trust, as a trustee and chairman and also in gardening and garden design. But, having spent several years designing gardens for other people, she became more interested in conservation and regeneration - or rewilding as it is called now. It is a slow movement, best suited to those patient enough to look after the future of the landscape.

So, this home is a corner of the world that is all about designing, making and the growing of things. Robin is still content to be designing ceramics, as he has been since he was 15 years old. Patricia is a little bit more restless, and likes to turn her hand to different things. It can be no coincidence that the growing of things - about continual renewal and constant change - has drawn her. The couple utilise every inch of their home and grounds, from installing experimental heating systems and new 3D printers, to building three lakes and brewing cider. This is most definitely not a retirement home. But still (importantly) they will never be without a well-designed cup to drink tea from, when they pause to admire their views. 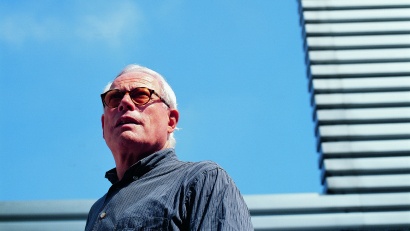 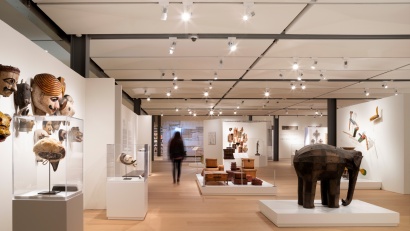 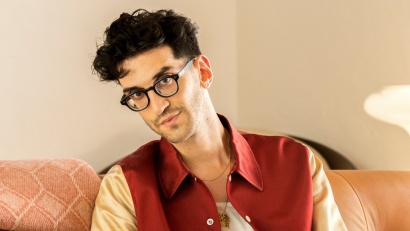 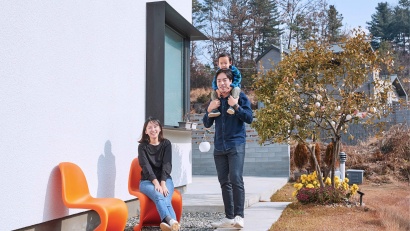