From punk to Bauhaus
Gary Hustwit connects the dots between his DIY aesthetic and Dieter Rams.

Like many of his contemporaries, he discovered design via emerging technologies, which democratised many creative pursuits – including film-making. “Putting my finger on why I started to make films about design goes back to my teens,” he revealed. “All my friends were in bands, so we decided to put on a show. We rented out a ballroom, hired a sound system and made some flyers – which was my first encounter with graphic design.

His sleeves-rolled-up approach to film-making stems not from the need to evangelise good taste, but a lifelong love of discovery. An insatiable curiosity has led him to become something of a cultural explorer, propelled by a motivation to uncover moments when pioneering people and their ideas have changed the world. “The chances of me discovering a new land mass in the South Pacific is very slim, but making the connection between an obscure designer, musician, architect or photographer – and how their work relates to modern life – is what drives me,“ he shrugged modestly. “Digging around for facts and pulling them together in a format that people can find interesting is a big draw.”

Gary Hustwit’s documentary ‘Rams’ is being premiered around the world in autumn 2018, with more dates continually announced at hustwit.com/events 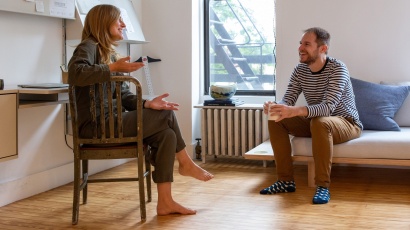